A while ago bothered by the heat and noise in my office, I decided to replace the Cisco 2600 router with a Linksys business class firewall/router. The RVS4000 was the perfect choice it has a stateful firewall, Intrusion Prevention System, Gigabit Speed and it was free. So I installed the brand new firewall and soon found out that I couldn’t FTP, it seems this was a common issue with the RVS4000. The Pakistani technician at Linksys said that, I shouldn’t need to FTP since the device doesn’t have a FTP server built in. After I had enough of Linksys’s crappy products and their shitty Paki support, I had an epiphany! I have a computer always running in the office to serve out movies and music for the house, why not make it a router as well?

The multimedia server’s base operating system was Windows 2003 Server and installing Routing and Remote Access was an option. However putting Windows 2003 on the Internet connection was just not appealing or safe. Ultimately I wanted to run PFsense, which is an open source FreeBSD Firewall/NAT; so why not virtualize it? I found a dual port network card in my closet of junk, now I just needed a way to isolate the Windows 2003 OS from the virtualized PFsense box.

After installing VMware server 2.0 and rebooting, I went into the network card’s properties and unchecked all of the bindings except for ‘VMware Bridge Protocol’. The VMware Bridge Protocol allows VMware to connect the physical port to an internal vswitch or virtual switch. With everything else unbound from the card no more worries of Windows 2003 being compromised on the Internet. The next step was to identify which network connection was public and which would be private, then label them both. You will also want to note which connection ‘Local Area Connection’ is and which ‘Local Area Connection #2’ is. Next you will go into the ‘Virtual Network Editor’ utility, where you will map the network card to an empty VMnet. You will basically connect a virtual connection between a real network card and the virtual switch. The next thing to do is to download and install the VIC or Virtual Infrastructure Client, the quicker you learn the VIC the better you will be. VMware Server 2.0 comes with a web interface that is functional, but the VIC is more responsive. The VIC can be downloaded from the web interface and gets stored in the VMware Server 2.0 install: just hit it with your web browser at http://hostname:8333/VMware-viclient.exe. 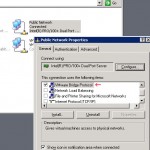 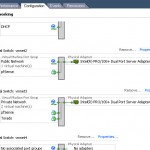 Now that VMware is installed and configured, it’s time to install PFsense. Just download the ISO from www.pfsense.org and import the ISO into the datastore. Set your guest operating system to FreeBSD (32 bit). PFsense only need 128MB of RAM and 1GB of disk space; I personally run 256 MB of RAM. Remember the order of the network cards (public vs. private), they will appear in the PFsense install as ‘le0’ and ‘le1’ and you will need to choose the public and private. Don’t forget to set VMware so that PFsense starts automatically when the server is powered up.

That’s it you’ve now consolidated a physical piece of your home network infrastructure into VMware. We can now take concepts that have been applied in the data center, home with us to take a step closer to being green. Maybe a future article will be focused on proper cooling technique for beer in relation to high density server racks.